I'm often asked where my ideas come from. The truth is, I never know exactly what will inspire me, when it will happen, or where it will lead, but I do know that it’s always something that touches me emotionally. "The Shoes" is a great example of this.

Here's how it went . . . .
A while back, my dad was in the hospital for a few days. His room was at the end of the hallway and I spent a lot of time coming and going. I visited at all different hours, checking on him before work, after putting my son to bed, and whatever other times I got the chance during the day. It didn’t take me long to notice the shoes in the room down the hall—they were always there, and they were the inspiration for this piece. I hope you enjoy it. 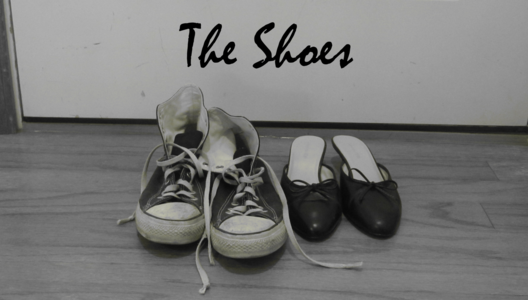 The shoes were in the same place every day during visiting hours. They were large and black with two Velcro straps. They were the type of shoe that only the elderly wear. White socks covered his ankles, but everything above that was obscured by the privacy curtain pulled across the open doorway. Although nothing more could be seen from the hallway, it was no surprise that everything in the room, even the bedside chair he sat in, was identical to that in every other room. Everything in every hospital room was identical. But what wasn’t identical, what was so perfectly unique, were the feet inside those shoes. And not even just the feet themselves, but especially the steps they had taken.

His first step had taken place in one of the most down-and-out times in history. But just like his steps, the times strengthened and became steady and solid. They were simpler times, times when letters were written with the strokes of a pen and deals were sealed with nothing more than a handshake. They were times when swing gave way to rock ‘n’ roll and cars grew fins. And for him, those times were just the beginning.

He was stopped in his tracks the first time he saw her. Sock hops were not his preferred pastime, but he quickly shed his loafers just so he could be the first one to ask her to dance. His smile more than outshined his two left feet, granting him every dance that night. And in the kiss he stole after walking her home, lay the promise that he’d be by her side to the very end.

It was a borrowed pair of wingtips that carried her across the threshold of a tiny bungalow. His sneakers looked so big, yet so right, next to the dainty slip-ons she wore everywhere. The longest year of his life was the one spent sweating in black combat boots caked with foreign soil and scarred by war. But when he came home, back to her, it was the steel toes that really fit. In those, he earned just what his family needed, and sometimes, even a little more here and there.

The three additional pairs of shoes inside the entryway of the bungalow constantly grew in size until it seemed they had disappeared. But they came back, and when they did, they each brought along a perfectly complementary pair. And to those, five additional, much smaller pairs like those that used to be there, had now been added. He knew those were her favorite days, days when sixteen pairs of shoes lay scattered about and the tiny bungalow was filled with heartfelt laughter and a the aroma of a home-cooked meal.

He knew it was time to call them. He wondered if it was selfish that he wanted a few more moments alone with her first, hoping for one more chance to look deeply into those precious eyes. He looked at her so frail in the bed, but she was still just as beautiful as the first day he’d seen her. It was her devotion to their journey of intertwined steps, the promise of seeing where they led, no matter the trials, the tears, or the heartache, that made her more beautiful now than ever.

And now, somewhere in the neighborhood of 200 million steps later, those last steps were the ones that really mattered. And, no, they weren’t the last steps they’d take together. Although he’d have to take a few, the hardest ones of his life, by himself, his steps would find their way the best they could until he could follow hers, until the day their steps would fall back into line, perfectly in sync, side by side, forever.